I recently scraped some photos of Valencia City and other places in Bukidnon at WikiMedia Commons.  Thanks to KleoMarlo who took these pictures.

Anyway, my story is this.  The photos of KleoMarlo are the same places I frequent.  Because I'm too preoccupied thinking about my (monkey) businesses, I seldom pay attention to these sites.

When I saw these pictures, I told myself I'll always bring my cam from now on so I can also capture the beauty of this province.  Well, here are the photos, I hope you'll like them: 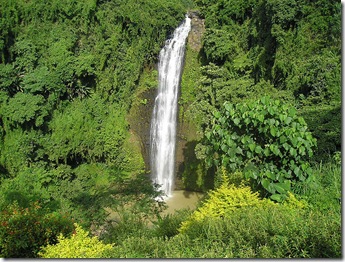 This is the Alalum Falls in Sumilao, Bukidnon.  When you travel to Cagayan de Oro from Bukidnon, this falls can be seen as you traverse the national highway. 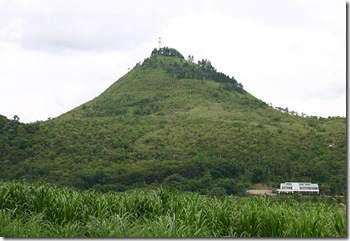 This is Musuan Peak in Maramag, Bukidnon. This mountain is very near our place, about a few kilometers away.  We can clearly see it from our house.

This is also an active volcano so I'm keeping my fingers crossed.  My son once asked if we can go hiking to Musuan. I doubt if I still have the energy to trek mountain trails. Maybe someday... 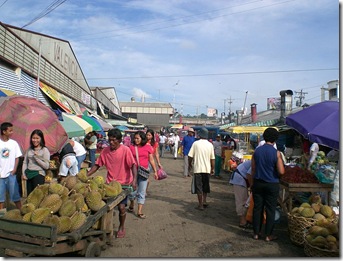 This is Valencia City Public Market. Did you notice the Durian? It's aplenty here.  I got the courage to taste it 2 days ago and it nearly knocked me off.

I wonder why they called it Food of the Gods.  I like the Durian candies though but spare me from the fresh ones. 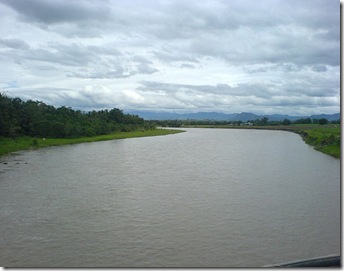 This is the Pulanggui River in Valencia City.  It is one of the biggest river systems in the province. I only see it from afar. Maybe someday I could take time to swim here. 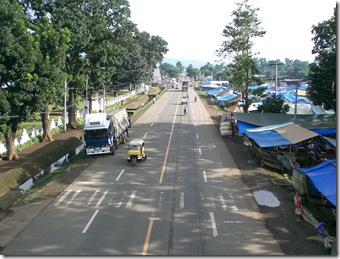 This is Sayre Highway in Valencia City viewed from an overpass. Did you notice the tree lined streets? Well, that is a common sight in Valencia.

More photos soon. And it will be my own rendition.  I just hope I can still squeeze my photographic juices. ;-)

I was browsing the web looking for materials for my articles when I stumbled upon an old blog of mine.  I created it sometime in 2007 and it only has 3 posts.

It is one of my blogs that I neglected and it is just there sitting helpless in the blogosphere.  Well, to make a long story short, I found one of my short stories there.  That was my action packed 'ala' Robin Padilla narrative.

I copied it (because I lost my hard copy and electronic file) and I will paste it here (I hope the Google Gods will not penalize me for duplicate content; hey, guys, that story was mine too.)

So here it is, my Robin Padilla story. Take note that this story is just a figment of my imagination.  Any similarities to actual events, names, etc, are unintended. (Sounds like a movie disclaimer, haha).

I LOOKED AT THE MORNING AND SAW DEATH

It was a dawn to remember. That fateful day started just another ordinary early morning in the hinterlands somewhere in the Visayas.

The well-trodden grass and leaves of trees were damp from the morning dew. Everything was silent; the barrio-folks were still slumbering and savoring the peace of the countryside.

Only the melancholy chorus of crickets and the sweet singing of morning birds can be heard. It was peaceful and frightful at the same time.

We spent the night in a peasant hut. It was owned by a certain Mang Karlo of Barrio Magtugas in Capiz. I and my four companions were on a mercy mission and social integration with the farmers of that barrio.

Our group was part of an NGO that was conducting literacy and numeracy campaign in Magtugas and its neighboring sitios and barangays.

We were volunteers, idealistic university students from Iloilo, who believed that educating the poor farmers can help improve their lives.

We wanted to give hope to men and women who were often victims of unscrupulous traders and middlemen who, almost always, cheat them because the farmers can’t read the numbers on their weighing scales and the letters on their log-books.

I went out of the house to pee. Damp grasses greeted my weary feet for we were always barefoot in going around the barrio to avoid slipping and tumbling into the rice paddies.

I inhaled deeply and savored the sweet smell of countryside breeze; it tasted like newly cooked rice.

I took a leak beside a mahogany tree and imagined that its branches will swiftly whack me in the head for disturbing his sleep. I smiled and waited but no tree branch came.

As I was coming back into the hut, the unthinkable happened. I heard two blasts, much like the sound of firecrackers, followed by another pair of blasts.

I thought: who the hell dared disturb the peace, and at that time when everyone just wanted to cuddle with his sweetheart or a nearby pillow?

I turned into the direction of the blasts, which was in front of the hut. I saw flashes of lights, like numerous flashlights going on and off.

Just then I heard it. Volleys of gunfire, thunder-like staccato of deadly burst. What’s worst, it was directed at the hut, towards us!

I dived towards the pigsty which was at the back of the small hut, away from the gunfire. I felt the onrush of the wind, but this time it reeks of gunpowder, sour and bitter, grainy and revolting. It immediately dried my throat.

I saw bullets, ember-like, glowing in the air, coming at us. The rain from hell kept on pouring; I felt its force, its brute power seeking our body, wanting to invade our physical presence.

Throat parched, I willed to shout at my companions inside the hut. “Guwa, guwa!” It means get out of the hut and save your sorry asses.

Bong, my buddy and the eldest among our group, came tumbling beside me. He was panting hard, disoriented and incoherent. I can hear his heartbeat, thudding hoof beats much like those of a horse gone mad.

We rolled away from the hut and jumped in a shallow ravine of about six feet. This saved us from the bullets. It whizzed overhead.

We ran away from the area and dived into the rice paddies, trampling newly-planted palay. Someone among the gunmen must have seen us for immediately, three successive whistling sounds wailed amidst the continuous barrage of automatic weapons.

It reminded me of my favorite firecracker from Bocaue, it sounded just like the “crying-cow” variety. But those are not “crying-cows” because after the dreaded whistle were three consecutive explosions that you can only see in Robin Padilla movies. The land rocked and trembled. Mud, water, and pebbles flew in the air.

Was this real? This was the maddening question that my mind begged to be answered. We were just boys, barely out of our teens and we were there running helter and skelter away from death. It was a scene reminiscent of “Platoon”.

Unfortunately all of it were real. Real people, real bullets, real guns, real explosives, everything was real, too real in fact that it borders on the surreal. Where everything was like suspended animation, where time was warped and in slow motion. I couldn’t believe it, much less accept that it was happening.

A splash of water on my face interrupted my panic-induced questions. Bong was pulling me from the rice paddies into a concealed creek.

We came to a bend where the creek ended and following its winding course we were able to reach higher grounds and thicker vegetation.

It was the forest and it became our hiding place, a place of refuge from the rampaging damnation a few minutes ago. The shooting continued without let-up. We rested for a while in between two boulders. We scooped water from a puddle to quench our thirst. We didn’t care anymore if it was laced with carabao dung. We just drank and drank.

At the crack of light, the shooting ended. We continued to trek deep inside the forest. We climbed an almost 90 degree slope, clinging only to tree roots and rocks.

We crawled under huge boulders barring our path. By mid-morning, we were able to find a very secluded place. We decided to hide there and wait for help, for surely the barrio-folks will come looking for us.

We started to worry about our other three companions. We were not sure if they managed to get out of the hut. A pang of solitude bit into my heart. We were alone in that god-forsaken place and we feared that our friends have died in the attack. Sitting there, I realized how hunted animals felt.

After almost five-hours of waiting, we heard shouting from below us. I knew then that we will survive that ordeal. I recognized the voice of our barrio-coordinator and he was calling our names. It was the sweetest voice I will remember for the rest of my life.

The men who attacked us were elements of the Philippine Army based in the province of Capiz. We were victims of mistaken identity.

They thought we were members of the New People’s Army. They were on a pursuit operations and we happened to be at the wrong place in the wrong time.

Our three companions survived the nightmare. They managed to flee in the opposite direction. We were reunited that afternoon at the barrio center. We were all bruised and battered but sustained no serious injuries.

It was very unfortunate, though, to learn that there were two casualties in that attack. It was Kumander Puti and Kumander Taba: Mang Karlo’s white-haired goat and five months old pig.

They were our dinner that night.

Amidst the din of bombs and the fiery staccato of gunfire, they cannot silence the poetry of dawn on these southern shores... 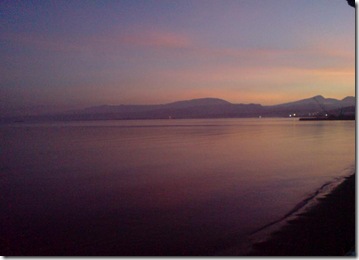 Hope lingers for a place as beautiful as this... 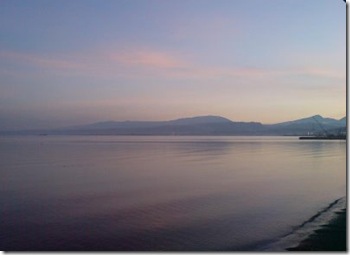